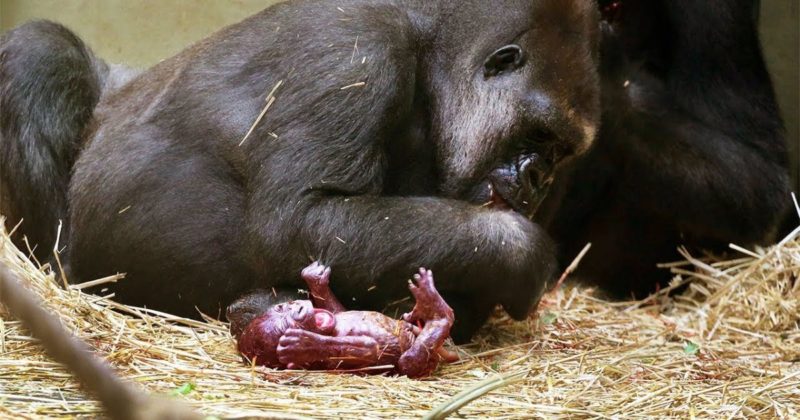 Sure, they have families too, they feed, and find shelter from the harsh elements, but more than all those survival traits, animals have feelings and they do express emotions.

Whichever side of the fence you’re sitting, there are countless videos to prove that fact.

Check out this mother gorilla with her baby, who by the looks of it is interacting with guests.

Her visitors are well behaved, just watching her and marveling at her size and looks. As if to show how much she appreciates them, the gorilla holds up her baby for them to see.

Her guests loved it!“Gorilla beringei beringei” can live up to 35 years weighing up to 500 pounds.

Habitat loss has always been a major threat hence why they are often kept in enclosures.

Agriculture, illegal mining, and forest destruction for charcoal production have degraded their habitats.

Then there is climate change which also poses a threat to gorillas. They can adapt by moving to higher elevations but those areas are densely populated with little forest remaining.Interacting with humans seems cute but catching disease is also a real danger.

Those glass windows and steel cages are there for the protection of both the gorillas and human visitors.

And besides, they can still interact as seen in this video!The mother holds up her baby then cradles it before kissing her baby to the “Aww” of her visitors.

Moms everywhere know the feeling all too well.

Female gorillas will give birth to one infant after carrying for nearly nine months.

But the newborns are tiny at just four pounds, so they’ll only hold on to their mothers’ fur.

ANIMALS 0 147
According to professional stylists, every woman is beautiful, the main thing is self-care, appropriate

ANIMALS 0 33
In order to cover the cost of her dog’s medical care, a caring dog

ANIMALS 0 378
Like people, dogs have different personalities and fates. Bertha was noble. A large,

ANIMALS 0 77
The owner of a cat in the Eastern Cape, South Africa, was startled to

ANIMALS 0 63
Bandit is a disabled dog in a wheelchair who lives in Georgia, USA. He

The plane crashed in the jungle with 98 passengers: After 9 days, one of the passengers appeared, she was the only survivor
INTERESTING NEWS 0 24